Uninvited and Unsubscribed: Don’t Let It Shake You! 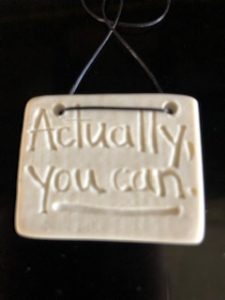 A beautiful little piece made by a dear friend!

I was not a very athletic girl growing up. I loved playing with my Barbie dolls and exploring the outdoors with friends, and I could keep my nose in a book for hours. Outside of playing a game of backyard dodgeball or tag here and there, sports were not on my radar screen. I certainly wasn’t clumsy; I just wasn’t into sports.

And usually I was one of the last ones chosen for team selection in that awful (and hopefully discontinued) practice of allowing students to choose their teammates. That hurt, over and over. My only satisfaction was that I usually shined brighter academically than most of the kids who didn’t want to choose me, and when I became a runner years later, I’d no doubt I could blow past any of them and run longer.

But listen to me. Can you hear the hurt and the little “Aha, gotcha!” in my voice? Sounds like a little revenge in my writing!

Oh, the hurt we experience when we aren’t chosen, aren’t invited, and even when someone unsubscribes to our emails and newsletters!

Regarding that last one, I use Mailchimp for my monthly newsletter, as well as for special offers. I do not bombard my subscribers with daily or even weekly emails. I send out one–Yes, ONE–newsletter per month with maybe an occasional second email regarding a special offer. That’s it.

So when I receive the occasional (VERY occasional) notification that someone unsubscribed to my newsletter, I look to see who it is, and what’s rattled me briefly at times is seeing a few names of people whom I consider dear friends and even a couple cousins. The old “not chosen” on the school recess softball team comes screaming back. It’s understandable to feel a little hurt and rejection.

Was it my message? Did something I write offend them in some way?

Or how about this? Maybe they, like me, just get too many emails and are trying to eliminate as many as possible. I completely understand that. Still, when it’s someone you KNOW, it can be a bit hurtful.

Then there are the social gatherings to which we aren’t invited. Ouch.

I hear this from coaching clients and friends alot: A friend has a gathering and doesn’t invite them, and they hurt… and sometimes they get angry. I understand. That happened to me last summer. Within the context of some other matters, being “uninvited” rattled me. But… that was the catalyst for my really looking at the big picture and sifting through it at my own pace.

And then there’s rejection in general.

I’ve worked with many coaching clients who are so afraid to step outside their comfort zones for fear of rejection. Some are paralyzed with fear.

In the fifth chapter of the gospel of John, the apostle writes about Jesus encountering the invalid man at the healing pool in Bethesda. When the Lord asked him if he wanted to be healed, he didn’t say “yes” or “no.” He gave excuses, saying that no one would help him into the water, that people just rushed past him. This has always baffled me. Did he not wish to be healed, or was he making excuses because he had become too comfortable in his comfort zone just lying by the water on his mat?

Based on my own and others’ experiences, I offer you some truths in dealing with the rejections in life:

You are worthy. Believe it.

You WILL be rejected, even by people you love. Jesus was.. Accept that.

You will not be invited to the party sometimes. And it’s okay. You’ll move on, even with a hurt heart.

Believe. Accept. Move on. Let it go. Shrug it off.

Don’t think you can.

Amy Walton is a multi-certified coach, teacher, and yogini who is learning to let what she perceives as rejection just roll off her shoulders.
This includes walking away from her very large cat when he ignores her. If you connect with her, she won’t reject you. That’s a promise.
Reach out to her at amywaltoncoaching@gmail.com.

You have Successfully Subscribed!